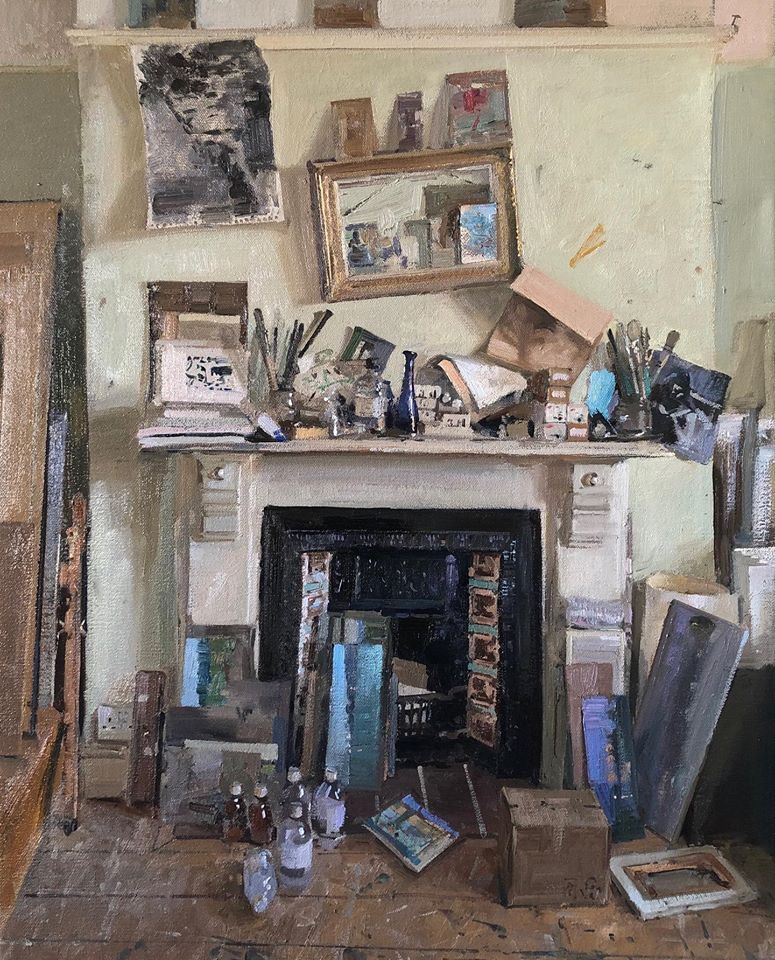 I always paint for exhibitions. My show at Bath’s Victoria Art Gallery finished in February and Johnny Messum had just offered me a show in London in November. I was panicking a bit. This was a short lead time to come up with fifty top-drawer works. I had also just finished my artist’s residency at Stonyhurst College and was gearing up for an exhibition there. I’d had the work photographed, the catalogue was being put together and the paintings (30 oil sketches of college life) were on their way to the framer.

Then COVID-19 arrived, and our lives began to change dramatically. Firstly, everything was cancelled or postponed, including the NEAC Annual Exhibition and the Stonyhurst show. Others were to continue as ‘online only’. The notion of social distancing was introduced (gradually) with encouragement to work from home and to avoid pubs, restaurants and large gatherings.

London had become very quiet. I decided to go up on the Thursday (18 March). I had started a large painting of Hammersmith Bridge in thick mist a couple of weeks earlier, and as it was overcast decided to go back to finish it. The tones and colours were not there but I needed to sort the drawing. I flew up a quiet M4, parked at a Premier Inn in Hammersmith and walked to the Lower Mall. That day, I finished the misty painting and from the same spot did a 12” x 10” of a similar view while the sun peeped through holes in the clouds and momentarily pinged on the ripples of the fast-flowing river. A phone call drew my painting day to an early finish as my son Toby’s halls of residence were being closed and students had to leave, so I headed up to Cambridge to pick him up.

On Friday 20 March, I returned to London sensing it could be my last chance for some time. I parked at Mall Galleries and wandered down Whitehall to Parliament Square. I’ve never seen the pavements so empty. Even early on a Sunday morning, there is the expectation of crowds arriving later in the morning. Traffic was very thin too, mainly buses and taxis. I found my subject at the Horse Guards building. The wonderful mounted Queen’s Guard now devoid of tourists posing for photographs. It was a grey day and I set up to paint for four hours. The armed police would come over every now and then to check progress. Amazingly, there was still the odd small group of tourists. The guardsmen liked the painting and when I posted it on social media later that day, a couple of them got in touch. That night they were stood down for the first time in their 350-year history. I had caught a historical moment. 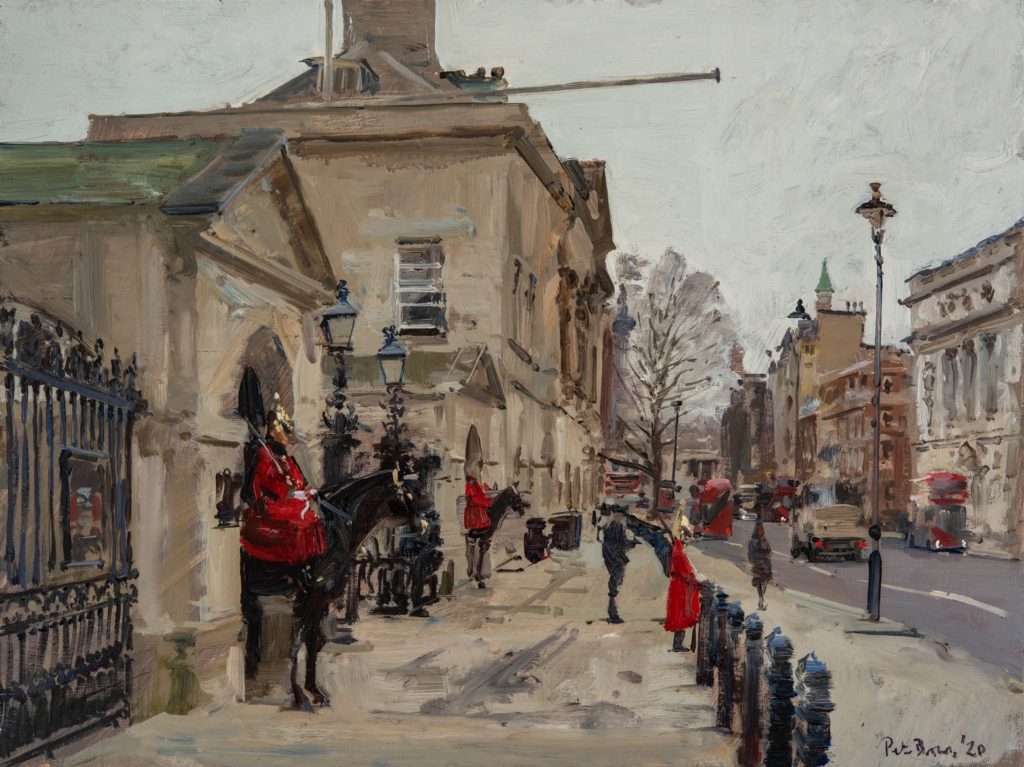 As I drove home, I knew that would be it for London for a while. I pondered going up on the Monday, but it did not seem right, so instead, I painted in Bath – the canal at Sydney Gardens. The nearby Holburne Museum was closed, and the park was quiet yet busy with walkers. The tennis courts above had been booked out and couples puffed and groaned as they banged balls over the net at each other from a safe distance. It was a beautiful warm spring day and although the tension was growing, everyone seemed at ease.

In the afternoon, I went up to Lansdown Crescent to finish a painting I had started. I chatted to a few of the residents (at the appropriate 2m distance) and was entertained by workmen erecting scaffold over an about-to-be-renovated house in the middle of the terrace. I painted the Crescent with its elongating shadow cast upon itself in the lowering sun and the sheep in the field below. It was an idyllic scene untouched by a world in turmoil. I put BBC News Live on my phone and propped it on the easel but learned that the 5pm BoJo show was to be aired later than usual, so I turned it off, packed up and headed home.

At 8.30pm, we sat down to the lockdown announcement. My eldest son Ollie had come back from Durham, so we had everyone at home now – all seven of us. Boris told us that we must work from home if we can, with the implication that if it was essential to travel to do your work, then that’s OK. What did that mean for ‘Pete the Street’, the steadfast plein air painter who ‘eschews working from photographs’?

The dilemma led to endless conversation for the rest of the evening. It was still in my head unresolved when I woke up on the Tuesday. I had a big commission in London which would keep the wolf from the door in these likely-now-quiet months ahead. All I needed was to get up for the morning to do a sketch which I could probably work from.

I worked it through in my head and concluded that I should stay at home. 99% of people who see plein-air painters assume it is a hobby. So if I went out, I would be seen as flouting the guidelines. Memes had started to appear on social media saying “Our grandparents fought in two world wars and we are being asked to sit on the sofa. Don’t **** this up!’ which helped square it in my head. Beautiful low warm spring sun or not, I was going to paint interiors in the house for at least the next three weeks.

As with so many ways our lives have been affected by this virus, there was a positive here. Something that would not show its head in my lifetime had we not been put under these restrictions. It meant I could concentrate 100% on these interiors and not worry about capturing a more beautiful or exciting view outside. It was in fact a liberation. The opportunity to do what I wanted – to put me 100% in control. And so it has begun.

The first day was hard to get started. The need to rush has been removed from our lives. I walk the dog happily in the morning in broad daylight, enjoying the sun on my back without worrying “God the light is wonderful! I should be painting!” because now we have time. I have time to stop and talk (two metres apart), to get home and have a coffee and a gas with my wife Lisa, to draw Ned still asleep in his bed . . . all before getting into some serious painting.

But it was not just this that prevented me from cracking on. There is a nervousness within us all and a guilt. We worry about our elderly relatives, about the awful loss of life around the world, and about the underpaid and overworked front-line staff who are going through hell, putting their lives at risk while we ‘sit on the sofa’. That all needs to be reconciled, accepted or put to one side for the sake of our own mental health.

Remarkably it was noon before brush hit canvas: a 25” x 20” canvas of the mantlepiece full of dusty untouched clutter, side-lit by the bay windows looking out to a crystal-clear blue sky. I just painted. No emails. No looming deadlines.

We all sat down for our meal at 6.30pm, and then watched the newly posted episode (Day 6) of my daughter Hattie’s YouTube vlog ’The Browns in Isolation’.

The next morning, I got up at 7am, and after the dog walk, coffee and chat with Lisa, I set up the easel to paint the sunlight on our unmade bed. It was not the most amazing painting. I had the chance to paint the sheets though. Who would ever want to buy that? Who cares!

At 11am, I had another coffee and a crumpet and sat on the bench in the garden in the sun with my eyes closed. It took me back to Studland Beach, outside the beach hut, lying on my back in the hot sand while my parents and brothers and sisters chatted. After 15 minutes, I returned to the studio and the mantlepiece painting which I worked on for the rest of the day.

Things are going to get a whole lot worse for a long time before they get better. As a painter, I am utterly useless. I have been told to do one thing: stay at home. I shall stand by my easel and paint and think about the age-old heroes of our society: the nurses, doctors and frontline hospital staff. And also the new heroes: the delivery drivers, the supermarket staff, the pharmacists, bus drivers, rubbish collectors, postal workers, etc . . .

It is very important, particularly if you are on your own, to stay sane. Be kind to yourself and don’t beat yourself up if you can’t bring yourself to pick up a brush (or whatever your tool for working is).

It’s OK to just sit in the sun and remember a beach holiday from when you were a kid . . .